You are here: Home / About Our Firm / CAYCIE D. BRADFORD, ESQ. 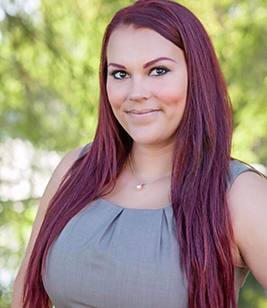 Ms. Bradford is the founding attorney of the C. Bradford Law Firm. Ms. Bradford was born and raised in the community of San Pedro and comes from a family with a strong history in the town. Ms. Bradford believes in the values and small town atmosphere of San Pedro. She hopes that her firm will continue in this town for years to come as her family has.

From a very young age, Ms. Bradford has understood the importance of standing up for what is right. Ms. Bradford has a strong interest and commitment to research on the effects of the death penalty and inmates.

Ms. Bradford attended Northern Arizona University, where she earned her Bachelors of Arts degree, with a major in Political Science and a minor in Speech Communications. She then attended Trinity International University where she obtained a Masters Degree in Communication and Culture with an emphasis in Human Rights. During her studies at Trinity International she attended the summer human rights program at the Institute for Human Rights in Strasborg, France, where she focused on prisoners’ rights around the globe. Ms. Bradford then obtained her Juris Doctor degree from the University of La Verne, College of Law.

Ms. Bradford gained valuable experience in defending criminal cases through volunteering as a certified law clerk at the San Bernardino Public Defender’s Office. Through this process, Ms. Bradford learned the entire criminal justice process and how to competently handle every step of a case. Since taking the bar, Ms. Bradford has routinely handled misdemeanor and felony cases.

As a mom of four, Ms. Bradford understands that a parent’s biggest concern is their children. She is personally familiar with the family law system and the toll that it can take on an individual. A divorce or custody battle is never an easy process for any individual to go through. Ms. Bradford is experienced in handling all types of family law matters from paternity to dissolutions.

Ms. Bradford has had a passion for human rights since attending Northern Arizona University, where she co-founded the Colombian Activist Network. This organization was created to raise awareness of the inhumane treatment of union workers in the bottling plants of Colombia. Additionally, Ms. Bradford took a stance against the United States Forest Service by supporting the Native American Tribes of Arizona in disagreeing with the making of snow on a sacred mountain in Flagstaff, Arizona. As a law student, Ms. Bradford published an article in the Cambrian Law Review on the court battle surrounding the mountain. Currently, Ms. Bradford has focused her attention on the rights of prisoners in the United States prison system, in particularly death penalty inmates. Ms. Bradford is against the imposition of the death penalty and supports the theory of the death row phenomenon, a focus of her research. Ms. Bradford has a published paper on the Death Row Syndrome.

Ms. Bradford is admitted to practice in all state courts of California.